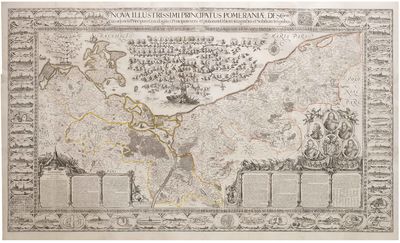 One of the finest pre-Enlightenment examples of large-scale surveying and mapping, and a seminal map for the cartographic history of Poland, this is Eilhard Lübben's monumental 12-sheet map of Pomerania.

Pomerania is the historical region on the southern coast of the Baltic Sea, situated between the rivers Recknitz and Trebel in the west and Vistula in the east, and comprised of parts of today's Poland and Germany. The Duchy of Pomerania was ruled by the House of Griffin from the 12th century until 1637, and the reigning ruler from 1606 to 1618 was the eccentric Duke Philip II. Philip II understood the connection between accurate maps and effective administration. Yet contemporary maps of Pomerania, for example a regional map found in Sebastian Münster's Cosmographia, were largely inaccurate. As such, Philip II decided that a new and detailed cartographic survey of his territory was needed.

For this enormous task, the Duke turned to mathematician and geographer Eilhard Lübben (Latinized Lubin, also Lubinus; 1565-1621). Lübben, the son of a pastor, was an accomplished polymath, teaching poetry and theology. His first published map appears to be of the island of Rügen, and was published by Jodocus Hondius in Amsterdam around 1609. It was shortly after that Philip II commissioned Lübben to draw a map of the entire Duchy.

A New Scientific Survey and Map

Lübben began his work in 1611 with extensive preparation, including a review of literature and an evaluation of existing cartographic sources, including manuscript maps made by the ducal administrator Daniel Froboese. He then made two tours through Pomerania from August to October 1612, aided by local officials who were ordered to help. During this time, Lübben amassed an enormous array of notes, drawings, and calculations.

The proposal, adopted in 1614, to supplement the map with forty-nine city views (many depicted for the first time) and the coats-of-arms of the Pomeranian nobility delayed the printing of the map considerably because there were no usable templates. Philip II commissioned Antwerp painter Johann Wolfhart to create the views of cities in eastern Pomerania; the views of cities in western Pomerania seem to predate the map, artist unknown. The aristocratic coats-of-arms were partially taken from Conradi's book on the subject. The request was made to all families that were missing, but in the end twenty-one were not recorded in time for publication.

Finally, after eight years of survey and compilation, work on the copperplates began in 1618 by Nicolaes van Geelkercken, a Gelders land surveyor and cartographer, and an employee in the Hondius workshop in Amsterdam. Twelve separate copperplates were needed to create the map. An initial run of an estimated 20-30 proof/presentation copies were printed in 1618 and given first to Duke Philip Julius in Wolgast Castle, and then to Duke Franz in Stettin (Philip II had died in February 1618). There is an exchange of letters between Lübben and the dukes, in which the cartographer claims outstanding wages.

Lost in the Chaos of the Thirty Years' War

The map was immediately recognized as a significant scientific and artistic achievement. A second edition was immediately commissioned, but unfortunately the paper ordered by Lübben proved unusable: it was too gray and too coarse for map printing. Thus began a dispute between Lübben and the paper merchants, which continued until his death in 1621. In the meantime, Central Europe saw the outbreak of the Thirty Years' War (1618-1648), one of the most destructive conflicts in human history. Initially a war between various Protestant and Catholic states in the fragmented Holy Roman Empire, it gradually developed into a more general conflict involving most of the European great powers.

It is estimated that some eight million people died during this period as a result of violence, famine, and plague. Pomerania was particularly devastated by the conflict. The last Griffin duke of Pomerania was Bogislaw XIV, who died during the Thirty Years' War, leading to the division of Pomerania between Brandenburg-Prussia and Sweden. In the midst of this upheaval, all trace of the copperplates of Lübben's map were lost. There are no known copies of the initial 1618 printing.

Rediscovery of the Plates

Over a century later, serendipity gave the map a second life. In 1756, Johann Carl Conrad Oelrichs found the printing plates undamaged in the attic of the house of the widow of the mayor of Straslung. A new printing was executed in 1758; thus, the second edition came one hundred and forty years after the first. The subsequent remaining whereabouts of the copperplates has not yet been clarified; most likely they were melted down to reuse the metal. The 1758 edition thus provides the only direct link to its Lübben's original towering achievement.

In addition to its cartographic accuracy, the decorative elements of the map deserve special attention. Many of the urban views are the first realistic representations of those cities, showing the most important cities of Pomerania before their devastation in the Thirty Years' War. At top center is the family tree of the House of Griffin with one hundred and fifty-seven first names and portraits of the dukes, and to the left of the island of Rügen is the family tree of the nineteen representatives of the Rügen dynasty. At the bottom right are five portraits of the dukes who lived in 1617, including the Philip II himself, as well as Philip Julius, Ulrich, Franz, and Bogislaw XIV. The map shows towns and villages, landmarks, churches, forest, rivers and mountains.

The dukes of the House of Griffin, including Philip II.

Family tree of the Pomeranian aristocracy.

The figure taking measurements placed above the scale bar is probably Lübben himself.