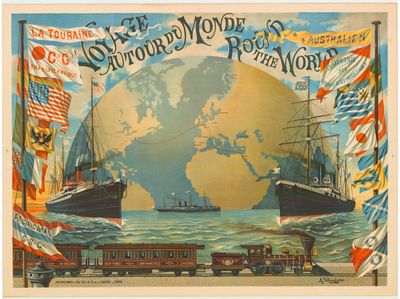 A breathtaking lithograph showcasing the latest technological advances and infrastructure by promoting a journey around the World.

One of the most stunning and well-conceived travel posters from the Belle Époque era of Parisian printing. Conceived as an ornate display of artistic expression and measuring an impressive 48 by 35 inches (123 x 90 cm), this magnificent poster's commercial aim was to promote passenger travel around the world. It is a vivacious and grandiose specimen within the genre of early travel posters, but it is also a splendid example of a significant paradigm shift in graphic expression, a shift that would define the aesthetics of the upcoming century.

As indicated by the signatures along the bottom of the frame, the poster was designed by A. Schindeler and originally printed by Paris lithographer Vieillemar & Sons. A slightly larger version of the same poster was later published on commission by the Schmidt Lithography Company in San Francisco. We know little about the artist other than the legacy he has left in this now-famous poster, but we do know that two of France's largest shipping companies, the Compagnie Generale Transatlantique and the Compagnie des Messageries Maritime, commissioned the work. These firms established the first 'round the world' passenger service on a fixed route starting from San Francisco; we must keep in mind that traveling on a global scale was a relatively new concept in the 1890s (Jules Verne's classic novel about doing it in 80 days was only a couple of decades old when this vista was first drawn up).

Using a visual language that heavily emphasizes atmosphere and contrasts, the illustrator promotes the idea that modern technology has made travel around the world possible, efficient, and comfortable. The imagery is stunning, with exuberant coloring that has been wonderfully preserved over time. Compositionally, the poster is the work of a masterful hand, including multiple layers of perspective, all laden with iconic symbols of progress and modernity.

The key element of the image is the globe, which is positioned to show the Northern Hemisphere, upon which we see the passenger route established by the French shipping magnates. Starting in San Francisco on the Pacific coast, red lines cut across the continental USA to denote the first leg of the journey, made on the newly built Transcontinental Railway network. Travelers could choose multiple routes; either a northern one via Chicago, a southern one via New Orleans, or the more direct cross-country line. In all three cases, the end destination is New York, from which one embarked on one of the great ocean liners to be carried in style across the Atlantic.

The route seemingly passes by Birmingham on the English coast before reaching its final destination in the French channel port of Le Havre. From here, another rail journey takes you through all of France, culminating at the great Mediterranean port of Marseille. A new ship carried passengers across the Mediterranean from Marseille through the recently completed Suez Canal (1869) and the Red Sea into the Indian Ocean. Here the route splits in two, offering either Bombay (Mumbai) or Calcutta (Calicut) as a potential Indian destination. While the final legs of the journey back to San Francisco have not been included in the imagery, reference to the possibilities is made in the form of the company's steamship flying under the banner of Australia.

Two of the companies' great Ocean Liners - the SS La Touraine and the SS Australien - frame the composition's central oceanic space in which a third company steamer plows its way across the sea. All three vessels look sleek and modern but also capacious and safe. At the bottom of the poster, we find the great Transcontinental Railway. This marvel of the modern world is featured in the form of a steam-powered locomotive drawing at least two Pullman-style passenger wagons. Inside are the silhouettes of passengers, including what looks like a small child peering out the window. Along the sides of the carriages, the main railroad hubs of the route are noted: New York, Chicago, San Francisco, and New Orleans.

Ultimately, this fantastic composition has all of the elements of a great poster and an incredible journey. It is bold and beautiful in its design, engaging in its content, and yet retains the simple functionality of providing viewers with their route. It is a visualization of the comfort and safety of modern travel, and it plays on things made possible by the progress of modernity. It is a new kind of advertisement, heralding not just a new age of mobility but a golden age of poster art.

Even though graphic art had been used for commercial purposes for centuries when this poster was conceived, the art and business of printmaking were undergoing a fundamental change in Paris during the late 19th century. Sometime during the 1880s, Jules Cheret (1836-1932) perfected the art of lithographic color printing, and this revolution propelled both graphic art and printed advertisements to new heights. These advancements came during the Belle Époque age of Toulouse-Lautrec and his contemporaries, famous artists who practiced their craft and sustained themselves through commercial printing.

With Cheret's perfection of the technique, entirely new options were available, causing the art of poster making to take off. By the mid-1890s, the face of Paris had changed completely. Everywhere one looked, lively broadsheets with colorful and sometimes provocative motifs caught the eye. Highly aesthetic female figures were among the most popular motifs and in line with the broader artistic trends of the time, but artists also filled posters with extensive ornamentation and patterning.

These kinds of 'busy' motifs dominated French poster making during the 1890s, but during the same period, we also see the introduction of new ideas and themes that were signaling the great artistic upheavals of the early 20th century. The key figure in this regard was Leonetto Cappiello (1875-1942), an Italian-French designer and illustrator working in Paris. While Cheret undoubtedly put posters on the proverbial map, Cappiello took them to the next level artistically and initiated the so-called golden age of posters. Cappiello simplified printing techniques and proposed a bold new aesthetic. Gone were the overly ornamental and busy compositions of the Belle Époque and Art Nouveau eras. Instead, he applied broad planes of color to create cleaner, more crisp designs. By the first decade of the 20th century, this new style became the dominant way of making posters, in many ways heralding the clean lines of the Art Deco movement some decades later.

Our poster is an excellent example of how trends were changing, as it straddles the two paradigms chronologically and compositionally. While it retains the minute details and ornamental devices of Art Nouveau posters (e.g. the flags flanking the central image), there is no central motif here. In the description above, we suggest that the central motif is the globe with the route printed on it in red. Yet this is positioned in the background, hovering above the open space of the ocean fronting it, and is deliberately portrayed using more fuzzy lines and coloring than other elements.

When considering where this poster fits into the chronology of early French travel posters, we note that the relatively early date of its production (1891) reveals it to be a rather avantgarde composition. Allowing the center of the canvas to remain vague shows that the artist behind it was self-confident enough to break with tradition and has the effect of drawing the viewer into this space and thus into the atmosphere that the poster is meant to convey. It is, by any standard, an exquisite piece of graphic art and embodies the spirit of the age, making it one of the iconic travel posters of the late 19th century.